Linseed oil has been used as a binder since the Viking era. Linseed oil paints, with their many positive characteristics, is highly convincing. Linseed oil is distinguished by its particularly good adhesion to almost all surfaces. It adheres to metals, wood and even plaster. Thus, it serves as a solid base should it be painted at a later date or after its application. Linseed oil colours are highly elastic. Linseed oil paints can be easily applied to previous oil paints. The tiny molecules of linseed oil penetrate the layers of previous paint layers and act as a great bond between these layers. This solid colour film is even permeable.

Linseed oil forms a solid film by the oxygen uptake and oxidation. Thus, this process causes an increased weight density of up to 20%. If the film layer thickness is found to be too strong during its application or brushing, the ink layer may dry from the surface, thus affecting the wrinkles or folds and forms, leading to endless drying times.

Almost all seeds and fruits contain fatty oils. Their quality and content of fatty acids are very different. Fat oils differ, roughly speaking, into two groups. The non-drying and drying oils. Only oils which, through oxidation on a normally non-absorbent surface, have the capacity to build an adhesive protective layer or solid film.

The most common drying oils are: linseed, poppy seed oil, sunflower oil and walnut oil. Linseed oil is the fastest drying oil from all of the oils mentioned and, therefore, very suitable as a binder or bonding agent. The other oils are not only more expensive to produce, they also have significantly longer drying times than linseed oil. When used as a painting medium, linseed oil prevailed significantly over other drying oils over time.

Linseed oil is won by pressing the ripened seeds of the flax plant. Only flaxseed plants containing 30-40% oil may be pressed. The purity, origin and growth conditions as well as the method of production shall ultimately determine the quality of the produced oil. Cold-pressed linseed oil only achieves a 20% yield. Cold-pressed linseed oil is clear and pale yellow colour. After pressing the seeds, the freshly pressed oil mucilage and aqueous components must be removed in order to avoid the unfavorable effect on the oil film’s drying capability and cause the newly produced oil to become sensitive to moisture. 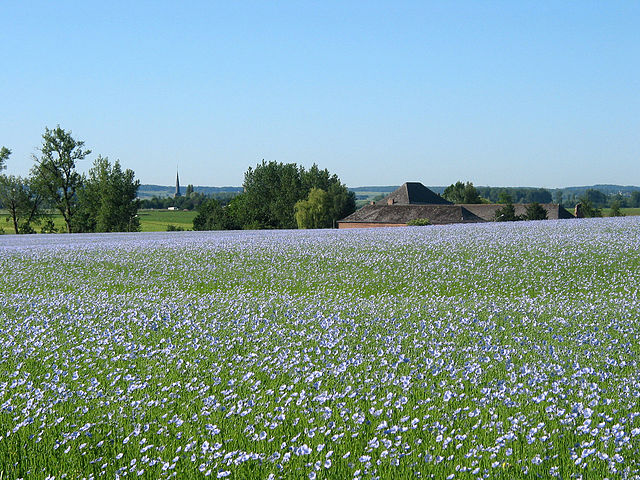